Home > Books > The Dark of Night

Rabid Reader says, “Once again Jason LaVelle has written an intricate, creepy and yet thought provoking story that keeps you on the edge of your seat... The storyline captures your imagination and sends shivers down your spine....”

Jane Straugh says, “The minute I started reading this I was hooked and could not stop reading it. There was excitement from start to finish, lots of twists and turns....”

Click the BookBub button to keep informed of special deals on this book and others by Jason LaVelle. Just FOLLOW him on BookBub, and be sure to BOOKMARK his books as “Wanted (Deal Alert)”–that way you won’t miss out.

COMING SOON: Watch for the unabridged audiobook to release in November 2020. 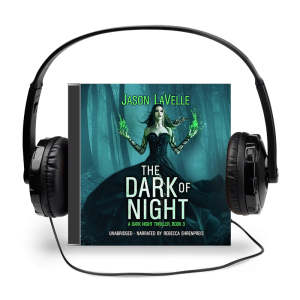 Other Books in "A Dark Night Thriller"

Preview
This entry was posted on Wednesday, October 31st, 2018 at 8:34 am and is filed under . You can follow any responses to this entry through the RSS 2.0 feed. Both comments and pings are currently closed.