Both Imperial Governor Scholtz and the Sovereignty Movement face a wildcard: a self-proclaimed queen, armed with an unstoppable A.I. and unbeatable warriors.

“This is a great story that is beautifully told... unforgettable characters, a well-imagined post-apocalyptic setting, and a monumental conflict. The twists will entice any reader and keep them rooting for the characters.” ~ Readers’ Favorite Book Reviews, Ruffina Oserio (5 STARS)

Eena is discouraged because the Sovereignty Movement has reached an all-time low, and martial law increasingly cramps the workers’ freedom. The students, pulled from the university to work at Onmatson Farm, labor under deplorable conditions. The cloned babies still face a dehumanized future. And Caellum, the leader who’s presumed dead, slinks about in Transtopia’s shadows until the oppressed farm hands revolt.

How will Biate, ensconced in Denver Airport and called “The Mad Queen,” impact the power struggle between Imperial Governor Charles Scholtz and the Sovereignty Seekers. Her unbeatable military force, and her connection to a powerful A.I., worries Dora and Caellum. So does her determination to obtain a child—not just any child, but a child of royal lineage—because when Dora gives birth to Michael, he’s the only such child around.

“The plot is twisty. The conflict is colossal. The characters are solidly developed... The story is fast-paced and episodic, balanced, and deftly written.” ~ Readers’ Favorite Book Reviews, Romuald Dzemo (5 STARS)

“...a hugely engrossing, intimate, and detailed work of sci-fi and fantasy fiction with plenty of intrigue on all sorts of different levels to offer its readers.” ~ Readers’ Favorite Book Reviews, K.C. Finn (5 STARS) 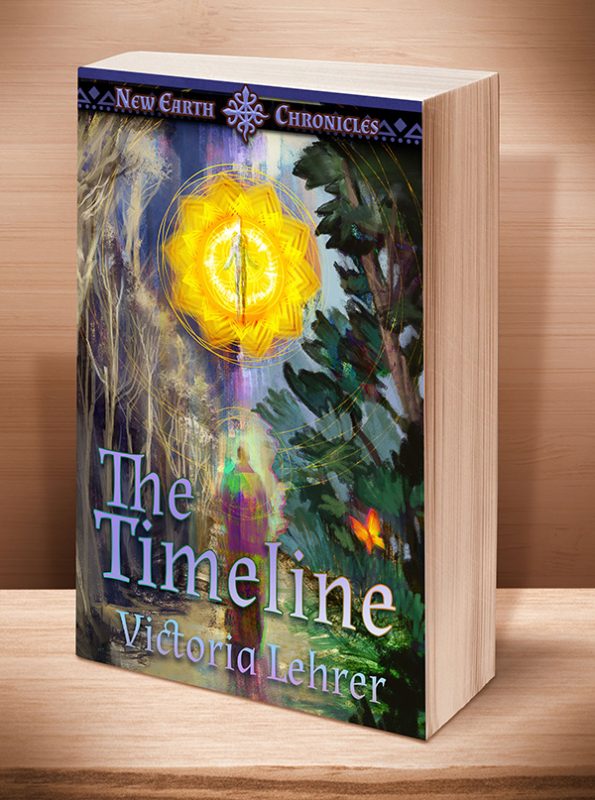 Watch for the complete unabridged audiobook to release in 2023. Please stay tuned to this page for updates.

“On Winged Gossamer by Victoria Lehrer is the third book in the New Earth Chronicles, a well-crafted science fiction novel with a strong post-apocalyptic setting. I have read the first book in this series, The Augur’s View, and was fascinated by the author’s imaginative setting and the strong writing, so when I picked up On Winged Gossamer, I wasn’t expecting anything short of excellence. And again, Victoria Lehrer delivers an experience that is far beyond my initial expectations. This is a great story that is beautifully told. The setting is a world that has been pulled asunder and where the strong take advantage of the weak. Science has evolved to a level where an army of robots is a reality and where cloning is a practice that is no longer uncommon. Victoria Lehrer creates an imaginary world that is exciting to navigate. I loved the way the author writes about the revolution in which the poor masses rise against their oppressors. On Winged Gossamer features unforgettable characters, a well-imagined post-apocalyptic setting, and a monumental conflict. The twists will entice any reader and keep them rooting for the characters.”

“The plot is twisty. The conflict is colossal. The characters are solidly developed. Victoria Lehrer is one of those authors who create an array of characters and keep each of them interesting, evolving through a conflict that sweeps everyone in its tide. There is a lot to enjoy in this novel. The author writes about a class struggle with groups having different degrees of privileges fighting against each other, and she does so in a way that infuses the writing with realism and compels readers to reflect on similar issues they face in society. The underdogs are the Sovereignty Seekers led by Caellum Nichols. They have few resources for a full-blown war, yet they are the backbone of the economy that sustains the tyrant. The rapprochement between the Mad Queen and Charles Scholtz, the Imperial Governor, is a trick to possess Michael. The relationship between Caellum and Dora is well-developed and it spices the story in many ways. While she is married to someone of “noble” blood, her heart goes out to the rebel. The story is fast-paced and episodic, balanced, and deftly written. The protagonist of this tale is not an individual, but a class fighting for freedom: The Sovereignty Seekers. While On Winged Gossamer is set in a post-apocalyptic world, it explores social issues that reflect contemporary society.”

“Author Victoria Lehrer has crafted a hugely engrossing, intimate, and detailed work of sci-fi and fantasy fiction with plenty of intrigue on all sorts of different levels to offer its readers. Having read other works in this series before, I was delighted to be thrown back into a fast-paced and well-established world where crazy tech and even crazier villains battle for control. I am a sucker for a well-developed and enthralling wicked character, so Biate quickly became the one I was searching for from page to page. But whether you’re into heroes or villains, you’ll find plenty of emotive characters, highly engaging dialogue, and all-out action and adventure in every single chapter of this excellent work. Overall, I would highly recommend On Winged Gossamer to fans of immersive otherworldly fiction, powerful political and military intrigue, and for readers of the existing series everywhere.”

– Readers’ Favorite Book Reviews, K.C. Finn (5 STARS)
Sign up for Updates
Preview
This entry was posted on Tuesday, December 15th, 2020 at 4:46 am and is filed under . You can follow any responses to this entry through the RSS 2.0 feed. Both comments and pings are currently closed.