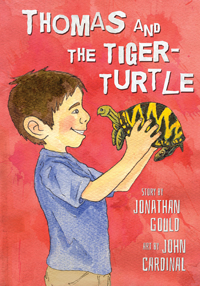 This children’s picture book is ideal for kids 3-7 years old.

Author Jonathan Gould has dropped by to talk a little bit about his writing of Thomas and the Tiger-Turtle. This is the first of what we hope will be many children’s picture books by Jonathan, providing a fun lesson for kids about the importance of friendship and self-esteem. Anyway, we’ll let Jonathan tell you how this entertaining book came to be.

Turning a Turtle into a Tiger – or Vice Versa

I’m really excited to be writing this post today. The release of my first picture book is a special occasion for me, and I’d like to send a huge thank you to everyone on the Evolved Publishing team for making it possible.

What was my inspiration for Thomas and the Tiger-Turtle? Where did the idea come from? Was it possibly modelled from life? Did I actually walk out the back door one day to discover a spectacularly colourful turtle nibbling at the grass in my yard?

The truth is, the story isn’t quite a reflection on real-life occurrences (although I do at times see spectacularly colourful creatures when I walk out the door—but that’s another story). The idea actually emerged from a little story idea game I like to play.

Generating story ideas is always a bit of a challenge. How do you come up with that brilliant idea that nobody else has ever thought of before? Especially in such a crowded field as picture books? That’s where my game can be really handy.

It’s a very simple game. All you need to do is write down a title—any title. You don’t have to have the slightest idea what the story is about. You just think of a combination of words that seem to fit nicely together, that catches in your mind and rolls off the tongue. I tend to go for alliteration, but that’s a personal preference. Once I get rolling, I can usually reel them out quite quickly, often doing ten or twenty at a time.

Once I’ve written down a bunch of prospective titles, I like to put them away for a while and come back to them later. I usually find that most of them are just random collections of words and nothing more. But every so often, there’s one that will catch my eye, and I’ll think I can do something with it. Thomas and the Tiger-Turtle was definitely one of these.

The next stage is to try to figure out how the title can be converted into a story. I’ll look closely at the words I’ve chosen, particularly those that pertain to character. What on earth is a Tiger-Turtle? What does it look like? What does it want to do, or to be? And who is Thomas, and how is he involved? Gradually, as these questions spin around in my mind, a story begins to emerge. A turtle that is convinced it’s a tiger, and a little boy who is convinced it’s his mission to make the turtle realise its true identity—now there’s a story.

Seeing the characters come to life under the brush of an illustrator has been just as much fun. I’m not a particularly visual person—I’m much more focussed on the word side of things. So seeing Thomas and his friend the turtle appear on the page has been an amazing experience. I’m really indebted to John Cardinal for his lovely, colourful illustrations.

So that, in a nutshell (Or should I say turtle-shell?) is how Thomas and the Tiger-Turtle came to be. I hope you enjoy it, and if you should ever see a turtle with a brightly-coloured shell, think about what you say to it. Turtle feelings are important too.

As the Zombie West series comes to an end with the upcoming release of Dead Plains, author Angela Scott discusses her journey into a world of zombies in the Wild West.

When people find out that I’m an author, their first question for me is, “What do you write?” It has taken me a while to answer, without embarrassment, that I write about zombies. I never set out to be a zombie writer. In fact, I prefer writing contemporary pieces—no vampires, no werewolves, no aliens, and definitely no undead—but that didn’t stop me from trying something new.

Let me explain: A few years ago, while I was still new to the writing business, I joined a critique group (the best thing I’d ever done), and at one of our get-togethers it was suggested that each group member write a few pages outside of their comfort zone. Pick a different genre and give it a whirl. It would be fun, they said. It would be interesting, they said. It would push us to write something we were unfamiliar with, they said.

So I went along with the idea, since I’m always up for new challenges.

The romance writer in our group was assigned to write a fantasy story, and the children’s writer assigned the task of writing a romance. Because I opened my big mouth and said, “Bring it on! I can write the beginning to any story!” (I said this in jest), they tasked me with writing a zombie western romance. Yep, a zombie western romance. That’s what I get for opening my big mouth.

Not to be outdone, I accepted the challenge, put myself in an Old West frame of mind, and wrote the first chapter. They laughed at the humorous parts and cringed at the gory ones, then they told me to go home and write more.

At this point, I’d just finished writing Desert Rice, a truly emotional journey for me, and I wanted the opportunity to write something fun, something new, something exciting. What would be more fun than writing a zombie western romance novel?

I decided to try a few things I’d never tried before—writing in third person, and writing from a male perspective. Could I write from a dude’s point of view without it sounding too feminine? I was curious to find out.

In 2010, I used NaNoWriMo (National Novel Writing Month) and wrote every day for the thirty days to create a first draft. I was having a blast, and my critique partners were enjoying it, but partway through, I realized I had several plot issues that wouldn’t easily tie into a nice bow at the end. There was just too much, and it would end up being a huge novel, given the way it was unfolding. I wasn’t sure what to do, and just about gave up. I’d done everything I’d set out to do—write in third person and write from a male perspective—and I was okay with the result.

But my critique partner and good friend, Diana Tracy, wouldn’t let me quit. It wasn’t enough for her. She suggested I turn the Zombie West concept into a series. She actually insisted upon it. I resisted; this wasn’t supposed to be for real. Not really. This was a joke, a writing exercise and nothing more. She kept insisting, and the more I kept writing WANTED: Dead or Undead, the more I realized that she was right. She was always right.

The other thing I realized while writing it was that I really enjoyed my characters and the whole Wild West setting. I think down deep inside I was always meant to be a cowgirl, and this was my outlet. These characters drew me in and made me fall in love with them. I wanted to know the end of the story, to give them their happily ever after, and so quitting while in the middle of their story was just inconceivable.

And that is how a silly writing exercise turned into the Zombie West trilogy, which Evolved Publishing picked up, and which has since won several awards. I’ve embraced my zombie-loving side, and instead of embarrassment, I’m proud. I took on a task unfamiliar to me, and feel as though I’ve succeeded at it fairly well.

Just goes to show that, sometimes, it’s a real good thing to step out of our comfort zone and try something different. We never know where it might lead.

So what is next for me? Who knows? Maybe I’ll tackle witches or aliens. Maybe I’ll write a children’s book or maybe a fantasy. I’m no longer going to limit myself, but remain open to all the various possibilities. I’ll write the story that wants to be written.

, the 3rd and final installment in the Zombie West trilogy, is officially releasing on Monday, October 21st, just in time for Halloween! (You can actually get it now, but… sshhhhhhhhh….) 🙂