The Syndicate doesn’t believe in divorce, but murder is another story.

“Wow! The Sally Ride Chronicle certainly does take you for a wild ride. KM Hodge does a great job with this prequel to ‘The Syndicate-Born Trilogy.’ Fast paced action, danger and thrills with a little romance will keep you wanting more.” ~ Hope Gerhardstein

Sally wants out—out of her marriage, out of the mob, out of Ocean City. An impossible dream. That is until the MDNA, a secret hacktivist group, invites her to join the ranks of their rebellion. The goal? Take down the criminal empire.

She's no Jane Bond, but no one in her town suspects the quiet church-going mom is a threat, especially The Syndicate's criminal defense attorney, Michael David, who's got a thing for mysterious blondes. His love-'em-and-kill-'em exploits, and his penchant for causing witnesses to disappear, make him enemy number one for the hacktivist group. Sally's mission sounds simple enough—destroy the lawyer's life and make him pay—but....

Once she starts, there'll be no turning back.

Follow Sally as she attempts the unthinkable—take down the largest crime ring in US history—in this prequel to "The Syndicate-Born Trilogy."

Order Now!
Other Books in "The Syndicate-Born Trilogy"

Red on the Run

Click the BookBub button to keep informed of special deals on this book and others by K.M. Hodge. Just FOLLOW her on BookBub, and be sure to BOOKMARK her books as “Wanted (Deal Alert)”–that way you won’t miss out. 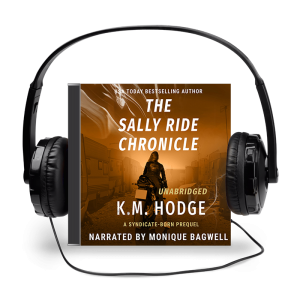 Sign up for Updates
Preview
This entry was posted on Sunday, November 26th, 2017 at 8:36 am and is filed under . You can follow any responses to this entry through the RSS 2.0 feed. Both comments and pings are currently closed.