Nillu Nasser Talks about the Writing of “All the Tomorrows”

We are pleased that author Nillu Nasser has stopped by to offer some insights on the writing of her new book, All the Tomorrows, which officially releases on Monday, November 6, 2017. And if you needed any more reason to be excited about this amazing book, just click on the picture below to see what 3 separate reviewers have said about it:

Without further ado, we turn this over to Nillu.

How I researched All the Tomorrows

Committing to a story idea is a funny thing, at least for me. It’s a decision that is made half with the heart, half with the head. My debut novel grew from an image I just couldn’t shake: a filthy, older, Indian man, pressed up against a window. That image refused to leave me for weeks, and my imagination began building on it. That’s when I know a story is worth investing in.

By the time I began writing the book in earnest, I knew the central character was a homeless man with a long lost love, and that he lived somewhere humid. Writing a novel, especially your first one, can be a daunting task. I had a hero, and the beginnings of a setting, but I decided to draw on my own experience rather than researching a setting from scratch.

I’m of Indian heritage, and so India seemed a sensible choice, and I loved the opportunities the setting brought to the story: the colour, the food and traditions. I knew my hero belonged here. That’s how All the Tomorrows was born, a story about second chances that unravels amongst the dust and grime of the Mumbai’s streets and behind the gates of opulent houses.

Still, there were gaps in my knowledge. I am at one Indian, and removed from India. My grandparents were born there, but I was born in the UK. My family traditions are rooted in both India and East Africa, with a splash of Britain thrown in. I have visited India twice, once as a child and once in my early twenties. My recollections are broad brush strokes: the smell of street food, the sticky heat, the palaces in Jaipur, the imploring faces of child beggars pressed against cool taxi windows.

For the details of my novel, I turned to travel guides and photo books. Cousins of mine, who live in Mumbai, provided eyewitness accounts. Friends sent me pictures of their own travels there. I watched Bollywood movies to drink up the setting. The internet opened up a wormhole, an unfiltered surplus of information, causing hours to disappear with the click of my trackpad.

How easy it is to get sidetracked. I needed to know the dates Indira Gandhi was Prime Minister, and within moments I was drawn into the tragic glamour of the Gandhi family, history I once knew, but which had all but escaped through the sieve of my memory: Indira’s rise to power, the loss of her politically-minded younger son in a plane crash, convincing her elder son to run for parliament and setting him on the path to his assassination ten years later, her own murder, and how the wives of her dead sons are on opposing sides of the political spectrum in today’s India.

Creativity is often about dreaming and drifting, as much as it is about perceiving and persistence. I liked how my research caused me to meander, how the novel was shaped by a chain reaction to materials I came across, and how my ideas morphed into something new.

For me, the best fiction shows glimpses of research but never burdens the reader; it is entertaining first and foremost. Fiction writers are not historians. Our magic power is making up worlds, with the hope that they are believable and authentic. Hopefully, I’ve achieved this with All the Tomorrows. I hope you’ll pick up a copy to find out. 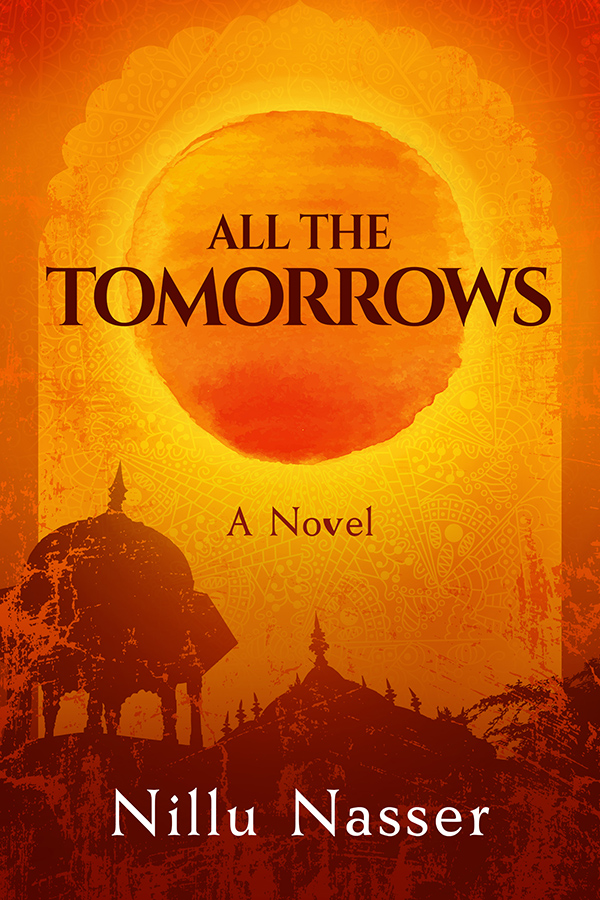 Releasing November 6, 2017 (Now Available for Pre-Order): All the Tomorrows

Sometimes we can’t escape the webs we are born into. Sometimes we are the architects of our own fall.

Akash Choudry wants a love for all time, not an arranged marriage. Still, under the weight of parental hopes, he agrees to one. He and Jaya marry in a cloud of colour and spice in Bombay. Their marriage has barely begun when Akash embarks on an affair.

Jaya can’t contemplate sharing her husband with another woman, or looking past his indiscretions as her mother suggests. Cornered by sexual politics, she takes her fate into her own hands in the form of a lit match.

Nothing endures fire. As shards of their past threaten their future, will Jaya ever bloom into the woman she can be, and will redemption be within Akash’s reach?

For more on the author, please visit her page here: Nillu Nasser.

As always, thank you so much for your continuing support. We couldn’t do it without you. And to make sure you never miss one of our blog posts, please sign up for our automatic feed by clicking on the image below.

All the Tomorrows Literary Fiction Nillu Nasser Women's Fiction
This entry was posted on Saturday, November 4th, 2017 at 5:48 am and is filed under Blog. You can follow any responses to this entry through the RSS 2.0 feed. You can leave a response, or trackback from your own site.