From Tweens through Gold to Adult

Author Cagey Magee, creator of the newly released Cass and Wat (NorthWatch – Book 1), offers some insights into what inspired him to write these wonderful books. NOTE: The second book in the series, Cass and Logan, is currently in the final editing stage, and will release on December 16, 2019. Indeed, it’s already available for pre-order.

We’ll have easy purchase links for the debut novel below, but first, we turn this over to Mr. Cagey Magee.

Once upon a time, my wise and wonderful partner and wife, Dot, and I were walking through a regrettably now extinct Borders Bookstore when she pointed to a huge hardback book. “Kids are wild for that,” she said. “They are actually reading again, even Jeffrey, who once stuck a book to the ceiling of my library.” As a librarian, researcher, editor, and writer, Dot knew who-read-what in the greater New York City area. Like the other books of Ms. Rowling’s estimable series, Harry Potter and the Goblet of Fire created devoted readers of all ages as well as a devoted group of notably insignificant detractors.

A few days after Dot’s and my Borders visit, I was leaving work and noticed an eleven-year-old girl, the child of a staff member, waiting for her mother and reading Goblet. I asked if she enjoyed reading such long books. “Oh, this is my third trip through. I love it. Every time I read it, I see something new.”

A few weeks ago, with all of the initial four-volumes of my “NorthWatch” series in existence in one form or another, I asked an English teacher from a prestigious upstate school what tweens and teens were reading these days. “They aren’t,” he said, “unless they care about making a decent grade, and that’s a far from universal pursuit.”

“NorthWatch” contains no magic wands, but it’s fun, just the same. I wrote the series because the tale and the world it predicts intrigue me, because I believe that an immense core of visionary tween and teen readers still exists, and because I find it great fun to consider the young adults of the future and what they will likely do. Even now, they’re influencing the world.

Fourteen-year-old Cassie Watson and her HeEm don’t play by the same rules in 2037 as they would today; neither will others of their age and time. That’s a good thing despite those parental curmudgeons who refuse to believe that adolescence is one of the most golden times of life, to be enjoyed by parents and anticipated by tweens.

Many prominent folks in every life pathway from Confucius to Disney to Prince embraced the necessity of always moving forward. Prince said, “Young folks are the ones with the ideas and constantly moving forward.”

I wish I had said that. Oh, perhaps I did—there’s more than one way to draw a hero, especially if it’s Cassie Watson. 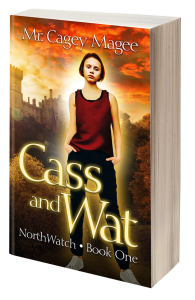 The eBook is now available at most major retailers, and the paperback is up at Amazon and in the works at Barnes and Noble.

“The relationships and intrigue come out brilliantly. The young protagonist is a fascinating character with a unique perspective on life, one that helps to deepen the use of humor in the story. The reader will want to unravel the mystery, to identify the mind behind Cass’s predicament and to find out if she can live up to her goal. This novel is hilarious, highly engaging, and entertaining.” ~ Readers’ Favorite Book Reviews, Christian Sia (5 STARS)

“Cagey Magee brings new meaning to coming of age thrillers in Cass and Wat. …brings his characters alive with vivid personalities and redeemable qualities. …overall, I was spellbound. I was impressed with the ending and look forward to more novels from this author.” ~ Readers’ Favorite Book Reviews, Peggy Jo Wipf (5 STARS) 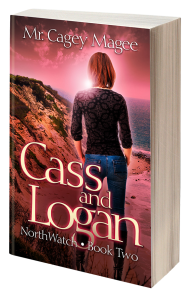 And to pre-order the second book, just visit the book page HERE, where you’ll find the appropriate links.

Cagey Magee Cass and Wat Coming of Age Mystery Northwatch Young Adult
This entry was posted on Monday, November 18th, 2019 at 11:36 am and is filed under Blog. You can follow any responses to this entry through the RSS 2.0 feed. You can leave a response, or trackback from your own site.