Praise is Piling Up for the “Essence of Ohr” Series 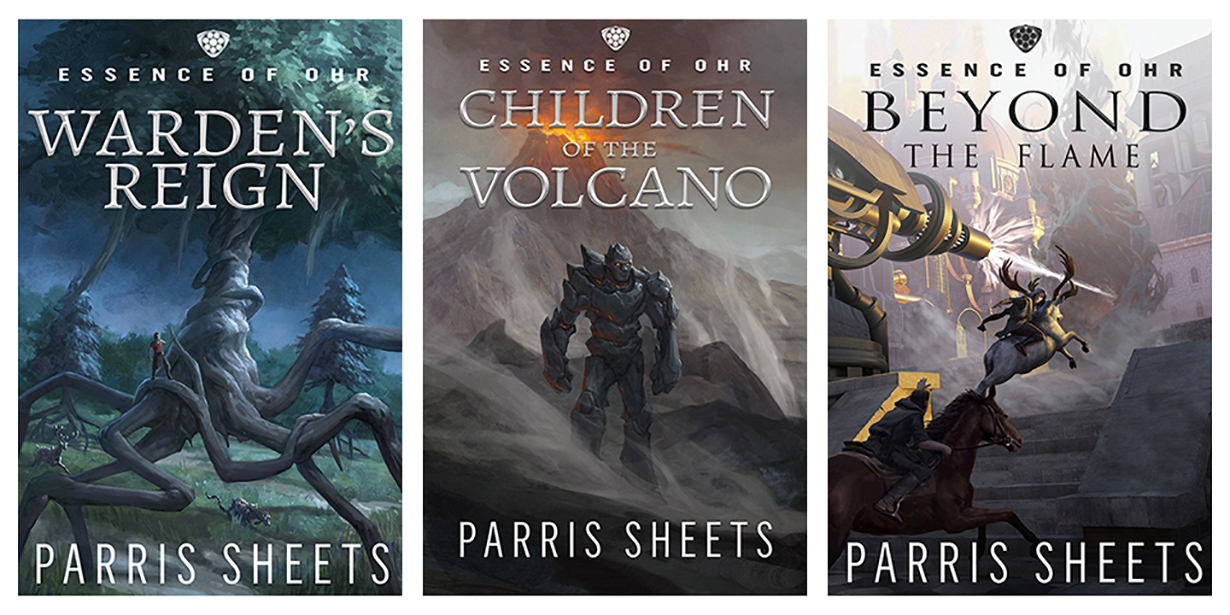 We felt pretty strongly after the release of Warden’s Reign by Parris Sheets that we might have a real winner on our hands. Well, with the release of Children of the Volcano, the second book in the “Essence of Ohr” series, we know it without doubt. The praise and recognition for this series is simply amazing. Let’s take a look at just a few of the remarkable reviews. (By the way, if you click on the cover, you’ll go to that book’s page here at EP, where you will find many easy purchase links.) 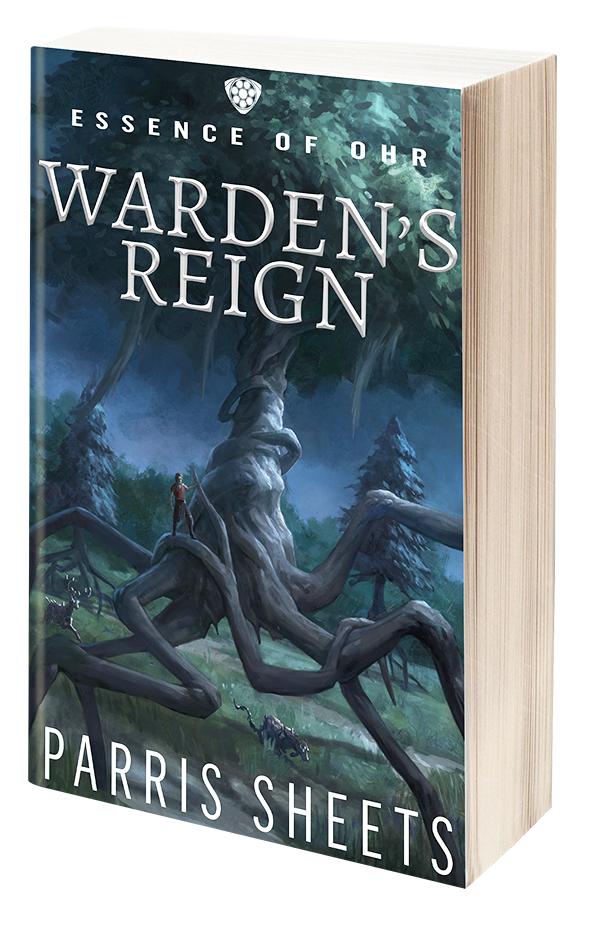 “The world-building is intricate, strange but compelling, drawing fantasy elements into its own cohesive and engaging lore. Secrets of the past become the key to the tyranny of the enemies. The moving trees, or the ramblers, and the gods of the realm known as the Souls add a mythical and fantastical charm to the story. The plot is well-developed, full of dark thrills, adrenaline-pumping moments, and heavy emotions of the characters who have been through so much but courageously strive to survive and win. Kole doesn’t remember his family or his past, giving the young protagonist a fascinating sense of mystery. A flawed, sometimes impatient but determined fighter, it’s easy to empathize with Kole as his guilt is a great burden to him. The antagonist, the Kayetan called Idris, is a frightening and manipulating creature. His dialogue alone is enough to project his malicious nature and the dark desire of his masters. With twists, loss, revenge, and a quest for peace and freedom, Warden’s Reign hits all the right notes not just for YA readers but older fantasy fans as well.” ~ Readers’ Favorite Book Reviews, Lit Amri (5 STARS)

“Parris Sheets’ YA epic fantasy, Warden’s Reign, kicks off the ‘Essence of Ohr’ series by drawing readers into a richly imagined world of walking trees, imprisoned gods, and the corruption of dark magic. Kole has a complicated relationship with his mentor, Russé, and camp leader, Goren, which is further aggravated by the discovery that they’ve been keeping secrets from him. These frictions add intrigue while Kole’s proud determination to prove himself introduces an element of excitement as the kayetan stalks the refugees through Solpate Forest. A layered world mythology folds into the gripping plot, and disaster forces the refugees to make a decision that will decide their future. Unique, imaginative, and well-crafted world-building and a plot rife with danger and startling discoveries make for addictive reading.” ~ Readers’ Favorite Book Reviews, Caitlin Lyle Farley (5 STARS)

“Warden’s Reign is an exciting beginning to what promises to be an action-packed fantasy series. I was reminded a little of The Lord of the Rings story with the forces of good trying to hold back the forces of evil, even though the good guys seem to be greatly outmatched. It’s also set in a world that reminded me of Middle-Earth. There are no hobbits or elves in Parris Sheets’s story, but there are peace-loving humans with vast cultural differences joining together to do battle. On the other side is an evil human playing with the powers of the gods and using them for destructive purposes. Despite my comparison to LOTR, Warden’s Reign is actually very original and extremely imaginative. My favorite element of the story was the giant walking trees called Ramblers. Fans of fast-paced fantasy adventures will enjoy reading Warden’s Reign and the rest of the ‘Essence of Ohr’ series.” ~ Readers’ Favorite Book Reviews, Scott Cahan (5 STARS) 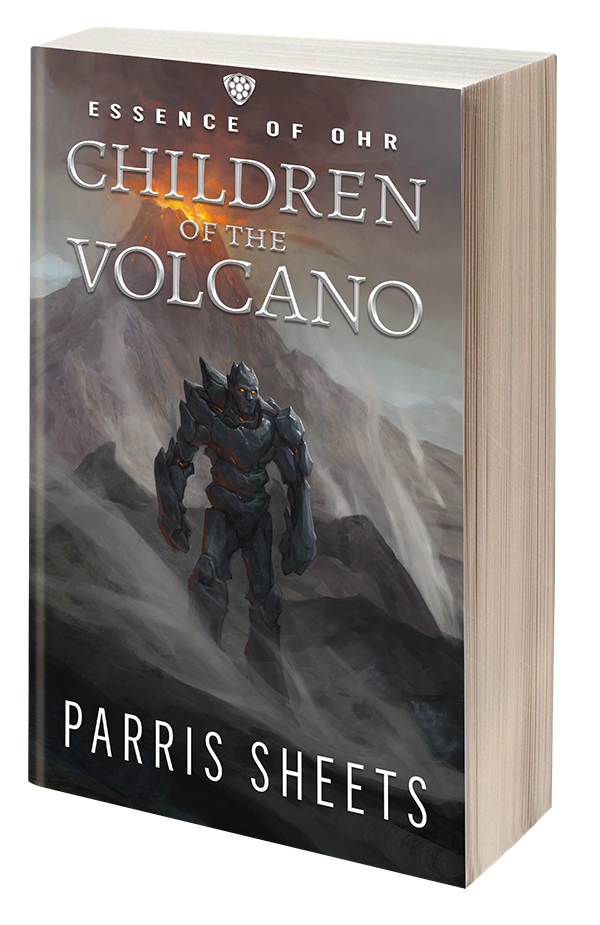 WINNER: (Submitted and pending, but we are rightly confident!)

“When people complain about sequels (whether it be in response to movies or books), those complaints are usually correct. But… stop the presses! Children of the Volcano is one of the very few that deserves absolute praise and not a hint of complaint. Yes, we are talking about a writer who has put together a tremendously well-written, action-packed sequel. (Go figure, right?)
…..“As a reader, it’s quite easy to say that the author writes with a passion that is equal to the creator of Potter and other YA series’ that inflame the imagination. It’s no surprise why Parris Sheets has won awards for this series already, and there’s no doubt she will win many more. Her ability to write about things like restoring life to a cursed, embattled horse to the journeys and emotions of vivid characters like Felix, Aterus, Vienna, and so many more, is phenomenal. You not only can ‘feel’ every step that’s taken in this book, you can visualize every moment. Throughout the entirety of the two books written thus far, you feel like you’re watching them play out on the big screen. All that’s left to say is, hopefully, the ‘big screen’ is where the ‘Essence of Ohr’ series ends up. (Are you hearing me, Hollywood?)
…..“It has been stated that Book 3 of this series, Beyond the Flame, will be released in 2022. That’s the good news. Bad news is having to wait until then to once again dive into a YA masterpiece that provides over-the-top, fantastical characters, plots and scenes from beginning to end.” ~ Feathered Quill Book Reviews, Amy Lignor (BRAVO!)

This novel is well-plotted and written in clear and beautiful prose. It is crisp and very descriptive, with images of a world that seems to abide by its unique magical rules and that features all kinds of creatures, including the gods, sorcerers, and beasts. Parris Sheets writes a plot that is labyrinthine and twisty, with surprises stacked along the rollicking adventure. The complexity in character development is one of the traits that kept my eyes focused on the pages. The dialogues are well-crafted and they constitute a powerful ingredient that moves the plot forward. Children of the Volcano is filled with mystery and a beguilingly rich magic system, a dark allure that keeps the narrative tense, and a masterly example of the elements of epic fantasy. ~ Readers’ Favorite Book Reviews, Jose Cornelio (5 STARS)

I love a good, fast-paced, action-driven plot. Parris Sheets starts Children of the Volcano with a bang, creates action from the first chapter, and hooks for more. The companionship and the partnership between Russé and Kole is the driving force of the story. The two of them work together; they support each other and respect each other. Kole looks up to Russé as a god and mentor, while Russé is exceptionally proud of Kole’s leadership and intelligence. The actual plot is brilliant. The chase to release gods, find them, unite them and save the world is a trope that we have read quite often, but not like this. There is a cinematic quality to the narrative and the way this story is written. It is perfect and incredibly entertaining. I cannot wait to read the next novel in the series. ~ Readers’ Favorite Book Reviews, Rabia Tanveer (5 STARS)

Coming-of-age in fantasyland can’t be executed any better. This story is well-imagined, cleverly plotted, and written to perfection. I was pulled in by the descriptive opening and from the moment I opened the book, I knew that this author has a unique gift for strong imagery and I was not wrong. Parris Sheets creates strong images in the reader’s mind, from the detailed elements of the setting to well-crafted scenes that are packed with action and enriched by exciting dialogues. The characters are well-developed and fully drawn, and readers will want to follow them through every one of their adventures and predicaments — Leo and his pet, Piper, Felix, Mikal, and others. Children of the Volcano is brimming with action and it is a tale with conflict that is deftly handled. It was hypnotic for me. ~ Readers’ Favorite Book Reviews, Ruffina Oserio (5 STARS) 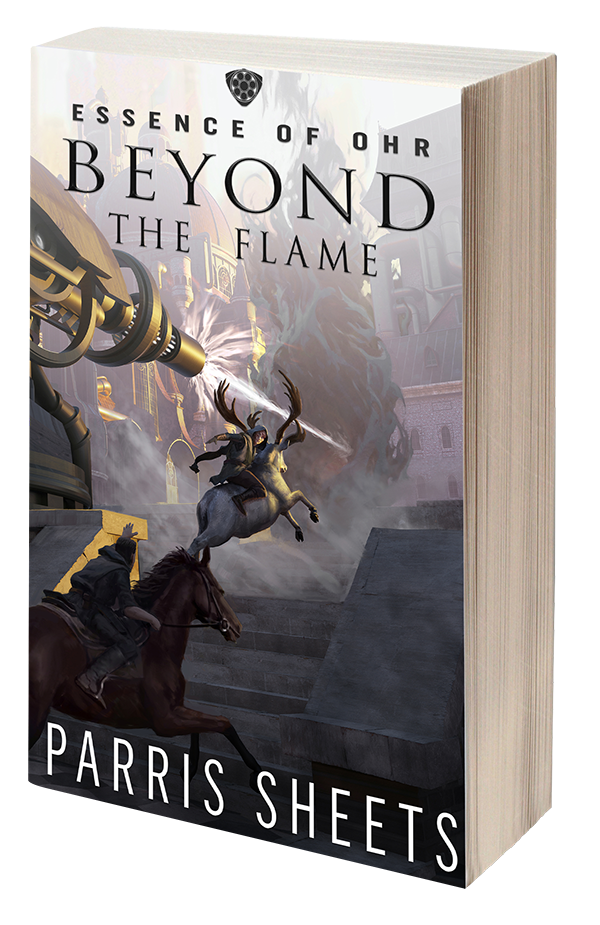 And are we excited about the release of Book 3 in the spring of 2022? Yeah… that is a rhetorical question, of course. 🙂 Here’s what you can look forward to:

When old scars open—wounds that never truly healed—can Kole find the courage to stand against the deepest fear he’s ever known?

In Kole’s quest to reunite all six gods, he’s led to a distant city where magic and technology have merged and proven as a combatant against the spread of the Black Wall. Yet the god he seeks lies beyond the border of the black wall of fire encroaching on the continent.

Kole plans to use this new-found technology to aid in his search, but when equipment begins to mysteriously malfunction, he suspects foul play. He must uncover and eliminate the perpetrator if he hopes to save Ohr, but a part of him wants it broken, or he’ll have to face the very entity which left him maimed.

And if we may, let us not just sing the praises of author Parris Sheets, but also of cover illustrator Sam Keiser, whose talent is on display in these remarkable covers. And of course, let us not leave out of the discussion the work of editor Darren Todd, who has helped Parris hone these stories to a fine sheen. This has truly been a team effort, and the end result is a great, great YA Fantasy series for your reading pleasure. Enjoy!

Watch for the vast, epic series Grims’ Truth to continue in the fall of 2021, with the release of Book 6 (the last book in the second arc), Soul of A Doll. Then, watch for Book 7 (the first book in the third arc), Lightfoot, to release in the spring of 2022.

The young Doll rescued from Hunter City must start a new life. She ventures into the kingdom of Tir Na Nog, and aims for her goal to become a Guardian. Her world is flipped on end when she makes a home and receives a name from her caretaker. It’s much harder to fight when feelings are involved.

Her training takes her across Tir Na Nog, from the Capital, to the Outlands, to the deep plains and beyond. As she grows, she sees her world in a new light and finds where her soul truly lies, but questions if it’s enough to save the Empire.

C.J. Ballintyne grew up on a steady diet of adult epic fantasy from the age of nine, resulting in a rather confused outlook on life – believing the good guys should always win, but knowing they often don’t. C.J. is an oxymoron; an idealistic cynic.

For fun, C.J. speculates about taking over the world – how hard can it really be? If C.J. could be anything, it would be a dragon, but to be honest, C.J. shares more in common with Dr. Gregory House of House M.D. – both the good and the bad. C.J. is a browncoat, a saltgunner, a Whedonite, a Sherlockian, a Ringer and a Whovian… OK, most major geek fandoms. C.J. holds degrees in law and accounting and is a practising financial services lawyer.

C.J. lives in Sydney, Australia, with two daughters and a growing menagerie of animals that includes two horses but unfortunately no dragons. To Make the Dead Weep 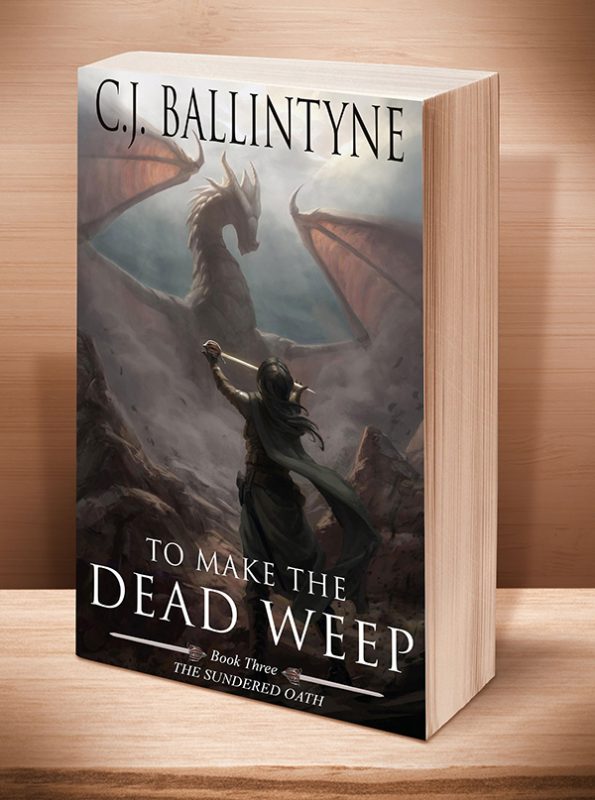 Watch for TO PLAY DEATH’S HAND, the fourth book in C.J. Ballintynes’s dark epic fantasy series, “The Sundered Oath,” to come in 2023.