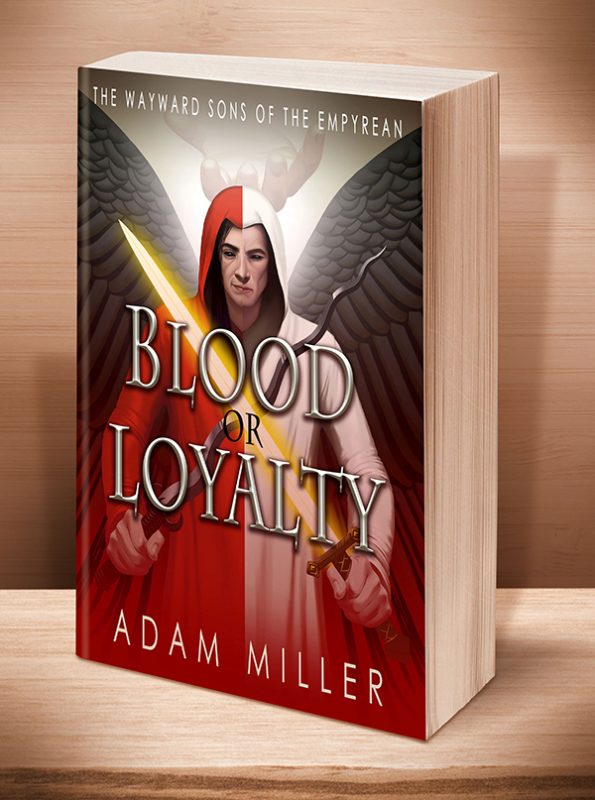 Good or evil was never the choice.

“...an insightful and exciting retelling of Lucifer’s rebellion against God at the dawn of creation. ...an unforgettable read.” ~ Readers’ Favorite Book Reviews, K.C. Finn (5 STARS)

“The narrative was brilliant, and I do not say that lightly. The action was palpable, it was intense....” ~ Readers’ Favorite Book Reviews, Rabia Tanveer (5 STARS)

Gabriel reminisces about his genesis while standing side-by-side with his big brother, Lucifer, and the other 13 archangels, as their Father creates the universe around them. They explore the seven distinct levels of Heaven and encounter the extraordinary, yet sometimes dangerous, beast that resides within them. They learn about their unique abilities, which they use to build structures or in friendly sport against each other. They honor their Father, and life is perfect... in the beginning.

When their Father mentions a four-letter name, Gabriel sees the hatred and jealousy build within Lucifer. Soon, angels face a difficult choice, one that will split Heaven in two.

“...one of the best books I have read about the primordial conflict between angelic beings. The novel is well-plotted, hugely imaginative, and packed with action.” ~ Readers’ Favorite Book Reviews, Romuald Dzemo (5 STARS)

Watch for all 6 books in THE WAYWARD SONS OF THE EMPYREAN series to release between 2021 and 2024.

“It’s a challenge to explore Christian scripture in a way that makes it truly exciting and dynamic for the modern or casual reader who isn’t a keen historian or theologian. Telling the stories of creation according to the Old Testament, whilst inspiring awe in the already devout, can be quite inaccessible to those outside of the Christian faith. However, Adam Miller has excelled in producing an insightful and exciting retelling of Lucifer’s rebellion against God at the dawn of creation. The epic conflict between Gabriel and Lucifer is told via a trail of world-building that doesn’t stray too far from scripture, action worthy of a modern blockbuster. The personal drama between the angelic brothers brings this cornerstone story from Christianity into the 21st century. I’m happy to recommend Blood or Loyalty to readers everywhere; it’s an unforgettable read and I could not be more excited to see where future books in this series go.”

“Biblical and religious epic fantasies often are too complicated or far-fetched for me to make a connection, but not this Blood or Loyalty. The narrative was brilliant, and I do not say that lightly. The action was palpable, it was intense, and it was a constant companion to Gabriel. He was pushed, cornered, and run over by his bigger and more powerful brothers. His faith was tested along with his belief, and Adam Miller made sure Gabriel’s emotions were relatable. The pace of the story took its cues from Gabriel. It quickened when Gabriel was in action and slowed down when things were not going his way. The author set the momentum and tone of the story from the beginning and kept it going forward until the end. The descriptions of war, especially the opening scenes between Lucifer and Michael, were harrowing and mighty! I loved it!”

“This is one of the best books I have read about the primordial conflict between angelic beings. Adam Miller has taken a Christian myth and created a fascinating story from it, crafting characters that readers will be awed by. Characters like Gabriel are very likable and I found myself hoping against all hope that they succeed in bringing Lucifer to his knees. The novel is well-plotted, hugely imaginative, and packed with action. The imagery is strong and the reader is transported to that moment of the seeding of an eternal conflict of good versus evil. Blood or Loyalty features first-rate prose. Lucifer craves an empty throne and Michael and the others stand in his way. ‘The Wayward Sons of the Empyrean’ is well-written and Ramiel, Rampel, and Douma are characters that readers will want to follow.”

More Options Coming Soon
Sign up for Updates
Preview
This entry was posted on Tuesday, March 17th, 2020 at 9:04 am and is filed under . You can follow any responses to this entry through the RSS 2.0 feed. Both comments and pings are currently closed.