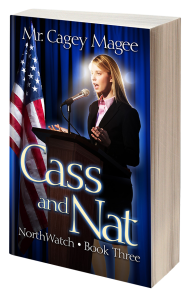 Watch for CASS AND NAT, the third book in the “Northwatch” series of YA mystery/thrillers, to release in May 2020.

After basking momentarily in her father’s inauguration and midnight marriage, Cass must race to Boston Children’s Hospital to save Little Mac. She’s beginning to suspect that she can no longer feast without at least two disasters for dessert. When Little Mac’s wheelchair explodes, she’s certain.

Cass Watson’s father, Glen Watson, is now President. In past months, she has acquired twin brothers, Lep and Little Mac. She loves her new siblings as much as her almost-boyfriend, Keith, but during their first White House visit, her life becomes even more complicated.

The International Academy for Excellent Youth in Washington is dying. Most of the highly and often secretly protected resident children of diplomats and of America’s top 0.5 percent have left because of the change in the National Administration. After Cass introduces her entire family at a White House news conference, they greet the press and visitors in the White House East Room. Near the end of the reception, the executive director of the Academy, with the permission of Cass’s pa, drops off two nine-year-olds, Patricia and Lemuel Bok.

Cass has always wanted a little sister, and befriends the Bok twins despite what they admit.