She studied International Affairs in Washington D.C. with the intention of diving into the political realm, but ended up diving into the ocean instead. An avid scuba diver, she spent seven summers sailing and teaching diving worldwide. For the next ten years, the wanderlust took her all over the world, from Russia to Tasmania, with many places in between, and eventually set her on a path of holistic medicine. She runs Blue Desert Hale, a wellness center and Cranio Sacral Therapy school, in the mountains of New Mexico. 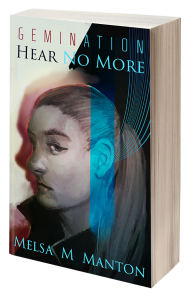 Watch for the first book of the “Gemination” sci-fi/psychological thriller series, Hear No More, to release 7 October 2019.

Big Brother is watching, but he’s quite the elusive doppelgänger, and he’s not the only one watching.

Leyla Stone serves the world as International 911, stopping injustices before the public is aware of them. The Sedition Underground is her home, but when she unwittingly takes part in an unauthorized assignment, her home becomes hostile territory.

The enigma of all enigmas, Devlin Vail, rescues her from what he calls Geminates, the product of a radical genome endeavor initiated by an international conglomerate, The Faction.

Stone is smack in the middle of a secret and relentless war between her former employer and new enemy. However, the enemy isn’t new—she simply has no memory of them. She remembers every waking moment of her life… but not of what happens in the moments between dreaming and waking.

Fantasy Gemination Melsa M. Manton Science Fiction Thrillers
This entry was posted on Wednesday, January 31st, 2018 at 3:48 am and is filed under Author Showcase, Team Member. You can follow any responses to this entry through the RSS 2.0 feed. You can leave a response, or trackback from your own site.