MARCH 1, 2021: We welcome our newest author to the Evolved Publishing Team.

An avid reader and writer since middle school, C.J. Sears is the author of the “This Fallen World” horror/thriller series. In 2013, he earned a Bachelor’s Degree in Creative Writing from Arkansas Tech University. After languishing a few years at a mundane job, C. J. set out to pursue his passion. Inspired by Twin Peaks and Resident Evil, he began working on what would eventually become The Shadow Over Lone Oak – the first of several books chronicling the adventures of eccentric Special Agent Llewyn Finch.

In the fall of 2016, C.J. gave his life to Christ. That faith now informs his storytelling and ongoing blog. He believes that fiction is a uniquely valuable medium for delivering both entertainment and essential truths. His emphasis is on the power of the parable rather than preachiness, and he affirms that no message should get in the way of a good story.

C.J.’s range of interests and hobbies include gaming, occasional poetry, swimming, and amateur photography. He mostly spends time with his family and loved ones, particularly his two rambunctious cats and silly goof dog. The quiet life suits him fine, but when a new vision of monsters and mystery beckons, he’s no stranger to answering the call.

The Shadow over Lone Oak 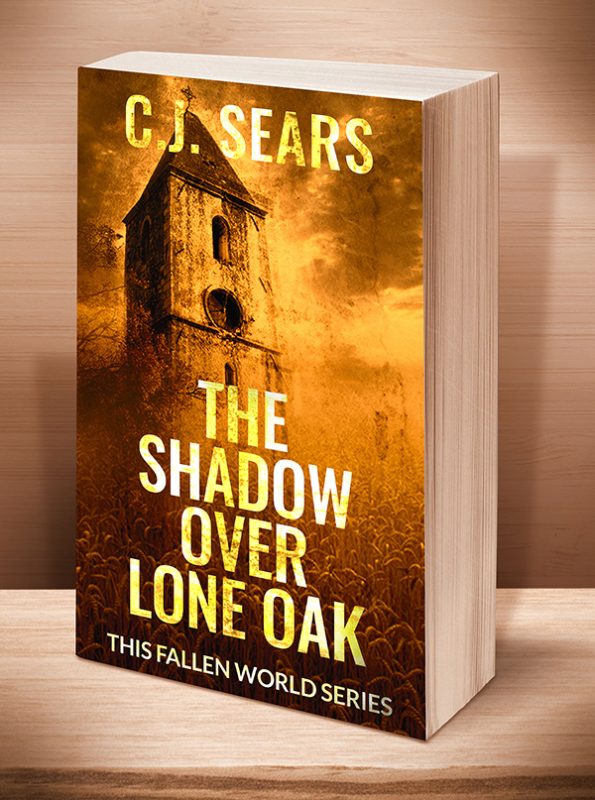 Watch for Book 2 in the “This Fallen World” series of suspense/horror thrillers, The Smiling Man Conspiracy, to release in September 2022.

In a world of deception, making the wrong decisions brings dire consequences.

Agent Llewyn Finch reunites with his former partner, Kasey Alexander, to embark on a mission to uncover the truth behind a series of abductions. There’s a hitch, though: Llewyn hasn’t recovered from his last case, and can’t shake the fact that where he goes, death follows.

Someone’s playing a mad game with the lives of innocents, and evidence points to a shadow organization within the government. As Llewyn and Kasey untangle the knots of a grand scheme, they aren’t sure who to trust.

EVOLVED PUBLISHING PRESENTS the second installment in the “This Fallen World” series of dark, creepy, horror thrillers. Better turn on all the lights! [DRM-Free]

Watch for Book 3 in the “This Fallen World” series of suspense/horror thrillers, The Sons of Darkness, to release in October 2022.

Agent Llewyn Finch journeys to a remote island, where a great and terrifying secret lies in the heart of the jungle… for those intrepid men of vision uncompromising enough to find it.

Llewyn investigates former black-ops specialist Elias Cobb, a charismatic man known for his dabbling in the arcane arts. Under Cobb’s tutelage, a paramilitary organization called the Sons of Darkness strives to create a new paradise on Earth, one obedient to his unified vision. Cobb seeks the mythical fruit of the Wellspring Tree, a medicinal wonder capable not only of curing any disease, but of enhancing various bodily functions to superhuman levels.

Llewyn races to find the fruit of the Wellspring Tree before Cobb and his minions do, but troubled waters guard the hallowed ground of the Whispering Isle.

EVOLVED PUBLISHING PRESENTS the third installment in the “This Fallen World” series of dark, creepy, horror thrillers. Better turn on all the lights! [DRM-Free]

C.J. Sears Horror The Shadow Over Lone Oak The Smiling Man Conspiracy The Sons of Darkness This Fallen World
This entry was posted on Monday, March 1st, 2021 at 10:32 am and is filed under Author Showcase, Team Member. You can follow any responses to this entry through the RSS 2.0 feed. You can leave a response, or trackback from your own site.