APRIL 30, 2019: We welcome our newest author to the Evolved Publishing Team.

I’m currently (as of 30 April 2019) a law student at the University of Texas in Austin. Prior to law school, I taught creative writing at John Hopkins’ Center for Talented Youth program, and worked as an editor for 1966: A Journal of Creative Nonfiction. I’m a graduate of Trinity University, where I majored in English and minored in creative writing. I’ve always had a passion for writing literary fiction, and after continuously reading and rereading my two favorite novels, The Things They Carried by Tim O’Brien and The Yellow Birds by Kevin Powers, I decided to write my own story about a soldier’s return home from Afghanistan.

Update 12 February 2020: I recently had a flash fiction piece, A Bookmark Near the End, published by the NY Times, which is pretty exciting .

Watch for Indivisible, a literary novel, to release in the summer of 2020. 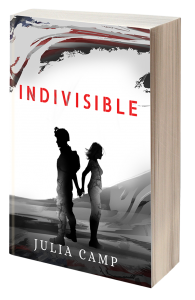 Charlie returns home from Afghanistan to discover that his battles are just beginning.

Ever since the death of his best friend, Charlie can hardly look in the mirror. He feels alienated from himself, and suddenly, things that used to feel simple seem unexplainably complicated. The weight of his past presses heavily on his soul. He wonders if everything that he did—letting his best friend enlist, deciding to enlist with him, being unable to talk about the war after they got home—all somehow led to his best friend’s suicide.

While trying to handle his own sense of guilt, he knows that he can’t freeze, that the people around him still need him to try to move on. His longtime girlfriend, Sarah, wants to know if they’re going to make it, if they’ll be okay despite the fact that he can hardly kiss her anymore. His family wants to know if he’s going to college now that he’s home from Afghanistan. His boss at the auto shop wants to know why he misses so many days of work.

Charlie keeps one foot in the past and one in the present, and feels himself getting stretched thinner and thinner. The weight on him only piles up, and whatever clarity he has about his life seems only to get more and more foggy. Why did his best friend, who once seemed so happy, decide to die? Charlie tries to solve the puzzle like a mystery, piecing together parts of his friend’s past, seeking a simple answer that’ll make everything seem rational. Then, maybe he’ll be okay. Then, maybe he’ll be able to move on. Maybe.

Julia Camp Literary Fiction Military Fiction Post-Traumatic Stress Disorder PTSD
This entry was posted on Tuesday, April 30th, 2019 at 1:52 pm and is filed under Artist Showcase, Team Member. You can follow any responses to this entry through the RSS 2.0 feed. You can leave a response, or trackback from your own site.