J.P. currently resides in San Antonio with his wife and hellion of a cat, both of whom look at him dubiously with some frequency. 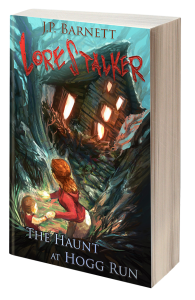 Watch for Book 4 in the “Lorestalker” series of suspense/horror thrillers, The Haunt at Hogg Run, to release on September 14, 2020.

It’s not awkward at all when you’re forced on a family vacation with your new stepmother and her young daughter. Reluctantly, Macy Donner agrees to it to please her father. But camping? Even worse.

Beset by ominous weather, power outages, and hulking shadows heralded by terrifying screams from the darkness, Macy realizes that she’s their only hope for survival—a thin hope, at best. Although she’s learned a thing or two from her monster-hunting friends, she’s not equipped for the horrors of the nearby, abandoned haunted house, or for its long-buried secrets—secrets that want to kill her.

And watch for Book 5 in the “Lorestalker” series of suspense/horror thrillers, The Devil of Misty Lake, to release in 2021.

After a number of run-ins with the terrifying monsters near her home, Miriam Brooks finally leaves Texas to hunt the legendary devil of Misty Lake. Eager to prove herself, she packs her bags and heads to the Pacific Northwest. Though known for its stories of Bigfoot, this lake holds something else entirely.

The devil’s been tormenting campers and swimmers for decades, and Miriam quickly learns that she’s not the only one after this monster. A ruthless hunter skirts the periphery, with a far more sinister plan. Forced to stay one step ahead of the competition, Miriam engages in a deadly game of cat and mouse… but there’s something much more dangerous waiting just below the surface.