Moss Cole Introduces the New Face of “Hot Sinatra,” and You Can Win Prizes

To celebrate the new cover of Hot Sinatra by author Axel Howerton, the leading man himself, Moss Cole, stops by for a chat. Be sure to enter the raffle at the end for some cool prizes. (Old cover pictured above.)

What the hell am I doing? Sitting here on this park bench, watching people play with their kids. Every morning, I tell myself that I’m just going for a walk, part of my physical rehabilitation. I’m just limping down to the corner to get some coffee, despite the fact that I can make it better at home, and the new girl behind the counter has red hair and an attitude—exactly the way I imagine her at 19. She left me behind. They both did. Too much trouble, I guess. Even after the bullets and the knives and the two months in the damned hospital recovering from them.

I don’t even know what I’m doing anymore. Thanks to Grandma Pot-Queen, I have plenty of money while I convalesce. Danny calls me twice a day to check up, three times on Sundays. He not-so-subtly pushes for me to take up a full-time spot with the band. I calmly explain that I’m not feeling strong enough to get dragged across the globe in his rock-star wake. Not today, Mossimo Cole. Not today.

On the other hand, every time the phone rings, I sit frozen in my big corner chair, straining to listen past the record player and the sounds of summer raging outside my windows. I sit there, terrified, waiting to hear her voice, or worse—someone looking for Moe Rossi Investigations, someone looking for the man I used to be. Someone looking for Moss Cole, Detective—the man who died in a blaze of glory.

So here I am, sitting in the park, all dolled up in shorts and a t-shirt and my friggin’ house-slippers because I still can’t pull on a pair of jeans, let alone my boots. So here I am, splayed out on a bench, not caring when people stare at my mangled, tattoo-covered leg. Not caring if I look like some kind of decrepit creeper, with my cane and my slippers and my old-man fedora, like I’m some 80-year-old punk-rock reject, like I’m Henry Rollins at the old folks home.

There’s dozens of kids running around, playing, jumping, climbing, screaming at the top of their lungs as they turn the playground into their own worlds, their own realities. Girls, boys, dogs—and they’re all so happy. It’s like a knife in my chest. Yet, I can’t stay away. Cake is blasting in my headphones, trumpets and SoCal sunny guitars.

I look around at the parents, bored and disingenuous. All the dads look like they just came from some BonnaFestaPalooza somewhere. They’re my age, or younger, every single one of them in black T’s from some band or another, every single one of them with tattoos and ridiculous wraparound shades. Shaved heads and porkpie fedoras—is that what I look like to the rest of the world? They all stand apart, clickety-clacking marimbas on their iPhones and mini-tablets, Facebooking and Candy Crushing and whatever other silly shit they do to avoid their lives and their kids and their wives. Their wives work hard and bring home the scratch so these dudes can play drums in bands with names like Stewed Shits and Monkeyfucker. Bands that will forever get nowhere, but let these guys hold onto their adolescence until they hit 50 and get a job selling cars in Reseda.

The moms stand in clusters around strollers and tiny bicycles tossed around the grass, occasionally scanning the horizon to make sure their offspring are still within chastising distance. The moms are all tan and fit in their tank tops and khaki shorts—black-rooted blondes and bottle reds, long legs and yoga asses. Their husbands are record producers, account managers, agents and big change bankers. They spend their days on play dates and wine lunches, mani-pedi appointments and tae kwon do lessons.

None of them know what they’re missing, barely noticing their kids busting their limits, challenging themselves to destroy the playground and its myriad obstacles. Kids are so awesome—none of the bullshit, none of the posing, no agendas beyond getting a second creamsicle or staying up late. They’re happy. They’re sad. They’re just happy to be here and explore the world. When do we break that out of them? Fuck. I never even got to take Holly to the park. I can taste the bitterness in my mouth. Maybe it’s just the shitty coffee.

One of the moms stares at me rather suspiciously. I don’t blame her. I’m a mess. Why do I do this to myself? I’m going to get arrested if I keep hanging around here. That would be the corker, wouldn’t it? Arrested for wallowing in my own grief, for stewing myself in what could never be. 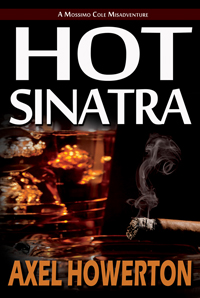 She’s pretending to read a book. I’ve seen it before: Hot Sinatra. Must be a good one. I’ve seen it before, in the bookstore window, in the shop at the hospital where you buy flowers and magazines and cards for people who just had babies. Must be a good one. Something about a detective and a Sinatra record. No thanks. I’ve had enough Sinatra to last me a goddamn lifetime. I think I’m switching to Dino, maybe Sammy; he did some good stuff with Count Basie. My head is fuzzy again. The doctors say it’ll pass. No real damage, they say. Sure. Step inside and say that, Doc. Come over for dinner at Chez Misery and tell me I’m okay.

Hot Sinatra. I’d almost think it had to be about me, but I’m not that far gone. Yet. It looks like a million other mysteries and thrillers, the booze and cigar pic, the title in huge block letters and the slightly smaller author name, Axel Howerton. It takes years to write a book, right? Booze and cigars and a sexy cover? Try bullet holes and heartbreak and macho mafia psychos and Mexican gangsters. Yakuza thugs and hot lady cops and crazy Irish rock stars and knife wounds and eight days in a coma and my grandfather turning in his grave. Drive-by shootings and little girls that steal your heart and their incredible mothers who break them. No way it could be about me, about what happened a couple of months ago. Right? No real damage. Right. Sure would make a good fucking story, though.

It couldn’t be about me, right? Hot Sinatra. In stores now! Couldn’t be.

Axel Howerton Hot Sinatra Raffle
This entry was posted on Saturday, July 6th, 2013 at 12:08 pm and is filed under Promotion. You can follow any responses to this entry through the RSS 2.0 feed. You can leave a response, or trackback from your own site.