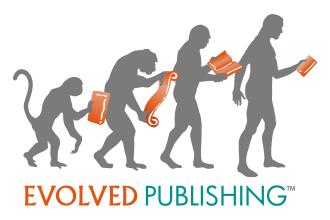 Formed in the second half of 2011, Evolved Publishing is headed by Lane Diamond (CEO) and Rick Eck (CFO). We’re a team-oriented, global company, and we’re growing each and every day, dedicating ourselves to providing our readers the best content. We’re serious about our business, but we’re also prone to epic Skype conversations and late-night excursions across the internet. We believe great books are one of life’s true pleasures, and we’re committed to offering you a great selection to choose from.

As of November 2016, we’ve published 195 pieces in total, though we’ve returned the rights to 19 of those to the authors. That leaves us with an active catalog of 160 titles in English, 6 in Spanish, 7 in French, 2 in Italian, and 1 in Portuguese (Brazilian) (we have more translated books coming soon). Our titles cross multiple genres, brought to you by some of the most talented authors around. We typically release a few new books every month, a number that will grow as our team continues to grow, which happens regularly.

We hope to entertain our readers, and we’ll bleed and cry and moan until we feel every piece is our best possible, but maybe without the melodrama. We say it a lot, because we mean it: Quality is Priority #1!