This book launches six days from today, on May 19th! 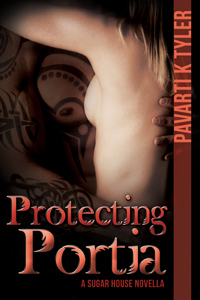 Jackson Grady met the love of his life. Unfortunately, he was running drugs for a pimp named Sasha at the time, who asked him to keep an eye on their new acquisition from Russia, the bedraggled beauty named Portia. She touched his heart and forced him to confront the kind of man he’d become.

Now, Portia and Jackson both work at The Sugar House. He continuously looks out for her, and longs for her with his every breath, but knows he is unworthy of such an angel. What will Portia do to win not only the heart, but also the body, of the man she loves?

Welcome to the world of The Sugar House, and the men and women who will fulfill your every fantasy. But can they find a way to fulfill their own?

Be sure to check out the other Sugar House Novellas, starting with Sugar & Salt, already available, and ending with Dual Domination, coming in December 2014.

~~~~~~~~~~
Writing Protecting Portia was an exercise in frustration. I wrote it three times before I finally got it right on the fourth pass. The story of Jackson and Portia just had so much going on, so much depth, so much hotness, and so much for the characters to exorcise, I just had to get it right.

Why was it so important? Well, because I tackled some big issues in this one: sex trafficking, PTSD in vets, addiction and our innate desire to be loved, even when we don’t think we deserve it. Perhaps especially then.

Oh, and then there’s the fact that much of the book is written from Jackson’s point of view. He’s a black man raised in New York city, deployed to Afghanistan, who returned home after a major injury and seeing his entire unit die. So I could totally pull from first hand experience on that… or not!

As an author, we pull in our own assumptions as we write, thoughts and feelings for our characters, but the further one digs into the reality of that world, the less we begin to matter. Jackson became very real to me. I could hear him speaking to me, his self doubt and desperation, but also the sweetness buried deep within him and his complete, undying adoration of the woman he loved.

I kept trying to tell him to go for it, tell her how you feel, but he didn’t listen. Ultimately, it was Portia who had to convince him. Of course it was. She was the one who really understood him, and the only one he really trusted.

Protecting Portia was hard fought, but I believe completely worth the effort. Now that it’s been edited (kudos to Melissa Sawatsky and Lane Diamond) and set to print with the amazing cover Mallory Rock designed, I can sit back and watch as Jackson and Portia share their story with you, knowing it finally got right where it needed to be all along.

Erotica Pavarti K Tyler Protecting Portia Romance Sugar House Novellas
This entry was posted on Tuesday, May 13th, 2014 at 6:01 am and is filed under New Release. You can follow any responses to this entry through the RSS 2.0 feed. You can leave a response, or trackback from your own site.