This book launches one week from today, on May 19th! 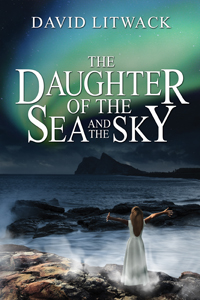 Author David Litwack has dropped by to talk a little bit about his writing of The Daughter of the Sea and the Sky. This is one of those books that’s hard for us to categorize: part literary, part saga, part speculative, maybe even a little religion or fantasy – but all great literature! And now, we’ll let David tell you how this great book came to be.


~~~~~~~~~~
The Daughter of the Sea and the Sky started with a single image—a troubled couple on the shore watching a small boat crash on the rocks, its sole passenger a little girl with golden hair and striking blue eyes.

Getting from that initial image to publication would take four more years.

The Daughter of the Sea and the Sky was the second novel I wrote (following There Comes a Prophet). I began working on it at a time of family turmoil. In the span of two years, my father, mother, and sister had all fallen seriously ill. I wrote the first several drafts while doing my best to help them during their slow decline.

How did my personal circumstances influence the book? I’m a logical person (math major in college and software engineer for most of my career), but I found no logic in coping with tragedy. A number of the themes of The Daughter of the Sea and the Sky came from that experience.

But personal experience alone does not make a novel. I finished the book and went through a number of edit cycles, but never submitted it. I believe that every story needs a core focus. Though I’d created a number of good characters and a unique premise, I was struggling to find the novel’s core. I set it aside while I wrote and subsequently published Along the Watchtower.

After the death of my three family members, I had time to reflect. As a result, I revisited The Daughter of the Sea and the Sky with a newfound clarity. Each character in the story—whether the faithful from the Blessed Lands, or secularists from the Republic—was dealing with personal trauma.

But this wasn’t their story. I realized the little girl, Kailani, had to be the focus.

The book is not about how the other characters change (and they all do), but how they change as a direct result of their encountering Kailani. Each of them sees her through their own lens as the solution to their problems. As they re-create her based on their needs, she helps them heal.

Yet no one sees the truth about her. Is she a mystical priestess from the Blessed Lands with the power to save the soul-sick, or a troubled child suffering from trauma of her own?

I rewrote the book to be Kailani’s journey. Through her, all the others, regardless of their beliefs, discover how much we share the human condition. Beliefs become less important than relationships, and the clash between reason and faith matters less than the power of hope and love.

David Litwack Literary Saga The Daughter of the Sea and the Sky
This entry was posted on Monday, May 12th, 2014 at 6:01 am and is filed under New Release. You can follow any responses to this entry through the RSS 2.0 feed. You can leave a response, or trackback from your own site.