Bodies have a canny way of finding Samantha Jean Haggert--the first, the dead body of her mama; the second, a naked man in the middle of the Arizona desert. For Sam, dealing with one dead body in her lifetime was more than unfair. Two is downright cruel.

Timiosanthos says, "She broke my heart in two with Desert Rice, and now, she follows it up with this gem of a novel. With beautiful prose, a distinct and enchanting voice, and life-altering themes of love, forgiveness, passion and hope, Angela Scott once again brings readers into the very heart of her characters' lives."

Seven years after running from West Virginia, Sam's now a young woman of nineteen, trying to put the pieces of her life together with the help of her family—Jacob, Boone, and Laura. But the naked man in the desert spirals her world out of control, resurrecting past hurts and revealing old secrets. It also pits against one another the two men who vie for her heart: Carson, her friend, her first kiss, and the one man who knows everything about her past and loves her despite it; and Turner, the stranger who knows nothing, but who excites and frustrates her all at once.

When bad choices made as a child lead to more bad choices as a young adult, Sam finds herself at a crossroads, forced to face her demons head-on if she plans to have any future at all—with Carson, with Turner, or with anyone. But fixing the wrongs of the past takes time, and learning to forgive one's self is damn near impossible.

Heather C. Cox says, "I've cried like a baby throughout this entire book, right until the end. Desert Rice and Desert Flower are MUST READS!! When you do, you will feel exactly as I do now. There aren't enough words to express my praise for these two books."

Order Now!
Other Books in "The Desert" Desert Rice
About the Book

Ideal not just for adults,
but also for teens aged 13 and up.

Click the BookBub button to keep informed of special deals on this book and others by Angela Scott. Just FOLLOW her on BookBub, and be sure to BOOKMARK her books as “Wanted (Deal Alert)”–that way you won’t miss out. 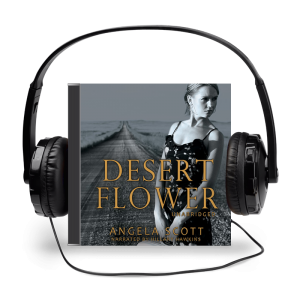 Listen to an audiobook sample of Desert Flower here:

Sign up for Updates
Preview
This entry was posted on Sunday, January 13th, 2013 at 9:15 pm and is filed under . You can follow any responses to this entry through the RSS 2.0 feed. Both comments and pings are currently closed.