We are excited to announce the release of 3 new books, each of which continues a great series already underway. We’ll provide all the details below, along with convenient links so you can purchase your copies today. 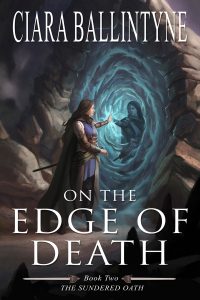 FOR OUR AUSTRALIAN READERS, GET THE EBOOK HERE:
Amazon – Australia
Apple iBooks – Australia

This dark epic fantasy is the second book in The Sundered Oath trilogy. Watch for part 3 to release in the fall of 2018.

All the Left Hand of Death wants is something to call her own, but is the price too high?

Ellaeva, the fated avatar of the death goddess, is desperate to track down her missing family but the trail is decades old. Instead, she discovers her battered and bloodied sister priestesses driven across the Jerreki border on pain of death. Ellaeva must turn aside from her personal quest to investigate the murders, only to find her parents have been taken into the heart of the conflict.

Lyram Aharris, favoured son of the royal line of Ahlleyn, is the only living person she trusts to help her infiltrate the enemy stronghold and uproot the horror they find there, but their chequered past threatens the mission. Accompanying him is his crown prince, the one man Lyram wants dead above all others.

Now Ellaeva must face down the darkness in her soul before a dark god is brought into the world.

At the boundary of life and death, all oaths will be tested.

Be sure to start with the first book in this series, In the Company of the Dead. 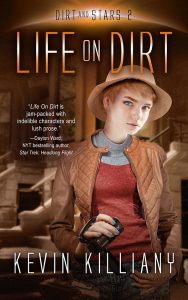 The second book in this young adult science fiction adventure is perfect for readers 13 and older.

Dirt is for rebels.

Sixty years ago the United States Space Service was created and empowered to protect the potentially unlimited knowledge and wealth of space for the benefit of the whole of humankind. Guardians of fusion technology and everything above the atmosphere, the Space Service controls the flow of people, materiel, and information between Earth and the space stations, Luna, and Mars. Everyone in space is bound to the Space Service, and all spacers belong to the Service-mandated racial elite. The Space Service owns the stars—and it does not intend to share.

Seventeen-year-old Mara Duval, born in space, was destined to be part of humanity’s first mission to the moons of Jupiter, until a medical accident left her quarantined on dirt forever.

But dirt is not the blighted wasteland she’d been taught it was, and the Space Service is holding humanity’s future hostage behind a wall of lies. Now Mara is fighting back by transmitting videos of the truth to friends in space, speaking out whenever she can, and sharing technology and secrets with her Dirt ally Jael Alden, a young visionary determined to break through the Space Service’s racial barrier.

She knows she doesn’t have much time before the Space Service realizes what she’s doing and stops her. But until they do, Mara’s going to make the most of her life on dirt.

Be sure to start with the first book in this series, Down to Dirt. This crime thriller/women’s fiction is the third book in The Syndicate-Born Trilogy.

The Son—born to save them all.

Dr. Zander Ride grew up a son of The Syndicate, his fate as a career criminal all but sealed. With the help of his mother, he escaped a life of crime… until the night he heard The Syndicate had shot his mother in cold blood.

Zander soon finds refuge in the hands of his mother’s hacktivist group, who want his help bringing down the notorious group once and for all. But it comes with a cost. Managed by a different leader and guided by a new deadly mission, the hacktivists force Zander to confront the truth about his parents and the sacrifices they made for the cause.

In the end, Zander must decide how far he’s willing to go and what he’s willing to sacrifice. Can a child born of The Syndicate bring it all down, or will he be another pointless sacrifice in their struggle for money and power?

Be sure to start with the first two books in this series: Red on the Run and Black and White Truth.

We hope you find one, two, or all three of these books to your liking, either for yourself or as gifts for your loved ones. As always, we thank you for your support. As an indie small press, we couldn’t survive without you, our loyal readers. Lastly, please share this great news with your friends.

This entry was posted on Monday, April 24th, 2017 at 6:40 am and is filed under Blog. You can follow any responses to this entry through the RSS 2.0 feed. You can leave a response, or trackback from your own site.