Or perhaps that should be, “Embrace your (Hi)Story.”

“What part of our history’s reinvented under rugs swept? What part of your memory is selective and tends to forget?” – Alanis Morissette, “Hands Clean”

“You know, it wasn’t always like this.” The 20-something guy decked from head to toe in red and black gear had to shout over the roaring crowd, and continued clapping as he talked. “I graduated in ’07… even back then, the games were nothing like this.”

“I know,” I said, surveying the jam-packed stadium. “I’ve been following this basketball team for a few years. They didn’t even get their first tournament win until 2011, right?” 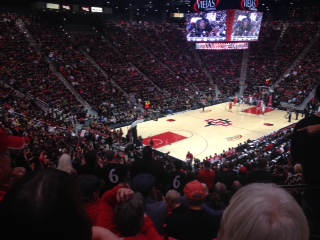 Indeed, San Diego State, the team I claim as my second favorite, did not always conjure such a following. As I looked around that stadium last Saturday night, I realized that acknowledging that past, and how far the team had come, brought up an important lesson that I’ve been struggling with the past few months.

It had been almost seven years since I set foot on the campus, my initial visit sparking a number of thoughts. The first sight of those red roofs and white stucco buildings left me in a sort of awe, overwhelmed with inspiration to keep writing my book. In fact, I’d come home with more clarity than ever that helping kids get to a college campus like that one (or like my own dream school) was the entire purpose for telling my story. The past was done—my book’s purpose was all about the future. 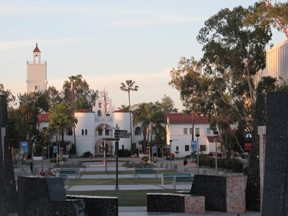 Yet over the next few months, as I’d continued to focus on using my story to inspire people to follow their dreams (college being a big one), I’d been forced to confront some demons in telling it. For the most part, I’d never told anyone how the fallout with a former friend and idol had inspired me to go to my dream school; that silence, along with several chance encounters with “characters” I hadn’t seen in quite a while, left me doubting whether I could or should. Would people think I was crazy? Could I get hurt even worse than when that person I’d trusted so much thought I was crazy too?

In September of 2008, I sent drafts out to my “first round of readers,” selectively chosen for knowing me across different segments of my life, but for not knowing much about the main story—I wanted them to read it as a “reader.” Their lack of familiarity with the more negative events, and their closeness to me, kept me from worrying too much about what they’d think of my actions. This was not the case with the person I had dinner with a month later.

Sitting across the table from my cousin that October night, a cousin who’d been friends with me and Maya, I’d literally never shaken so hard. I couldn’t even lift the fork all the way to my mouth to get food in, so instead, I let him eat his dinner while I described the background behind my brief statement to him ten years earlier. “How’s Maya?” he’d asked one night right after her and my fallout. “We’re not friends anymore,” I’d simply told him, and he’d let it go with a curious look.

On this night, I told him why we weren’t friends at that point, about how I’d written a crazy letter to try and help her that instead pushed her away, likely without her ever seeing my intentions were good. In fact, she’d made me feel crazy for even trying to help her in the first place, which was one of the reasons I struggled so much with the whole experience.

He nodded throughout my monologue, interjecting with a few supporting thoughts of his own, and at the end shook his head with a sympathetic smile. “Writing the book must have been so cathartic for you.”

Yes, but perhaps not as cathartic as the fact that people didn’t think I was crazy for doing so.

That weekend in Atlanta gave me the final confidence I needed to go forward. After a couple years working with an editor, I published the book with pride. Still, it wasn’t all smooth sailing. While I received a multitude of positive feedback and encouragement from college enthusiasts, family, friends, and many other readers, one mutual friend of Maya and mine suddenly changed her stance on the book. She’d supported it from the get-go, understanding from reading it that the story of how I’d been hurt was only a small (and truthful) piece of a much bigger message. Yet having it out there proved too much for our friendship, and though it was only one person’s discomfort, I once again found myself questioning whether to keep going with it.

Then, there were the events of 2013—a few separate occurrences, but primarily my father’s unexpected passing. We couldn’t have been closer at the time—the last three years the best of our entire relationship—but the years before had been an emotional roller coaster with his alcoholism, much of which had played out in the book. None of it was any less true, and of course, my purpose in telling it all once again was about how I had learned and grown and been inspired by the good and the bad. My dad himself had supported that notion, but suddenly, taking positive from the negative felt wrong. Perhaps the time to tell the story had come and gone.

In February of this year, NBC aired a special about another former idol of mine, Nancy Kerrigan. The 1.5 hours brought up several childhood memories, particularly the journal entries my fourth-grade self had written about the figure-skating saga: how mad I was at Tonya for hurting Nancy, how excited I was that Nancy was still going to the Olympics, how disappointed I was when she won silver instead of gold. Picturing these entries brought laughter, but then a scowl—I didn’t have that journal any more.

On the night of my fallout with my next idol, I’d thrown it out, appalled that I could have ever written anything about my admiration for her. A huge packrat, it is perhaps the most impulsive thing I’ve ever done, and, had the trash not come that very next morning, I’d probably have reconsidered and dug it out. Instead, because of a few negative events, I’d thrown out a huge piece of my childhood. Good or bad, I realized, looking back on all of it, each and every one of those entries revealed a part of who I was. 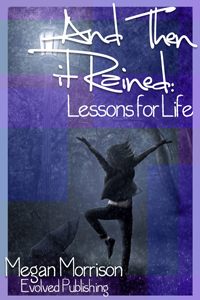 And Then it Rained: Lessons for Life is a memoir. Unlike the other offerings from Evolved Publishing, the characters are not made up, yet they are just as vulnerable as the fictional characters in the other books, the main character being no exception. That’s why those fifteen years of my life aren’t always easy to share, but perhaps that’s what makes it so powerful. It is a history—my history. It’s the story a multitude of positive experiences and how each one of them helped shape the person I am today.

At the end of the game last Saturday night, San Diego State students rushed the court. They were ranked exactly 11 spots ahead of their opponent—expected to win—and thus I’ll bet lot of basketball fans watching shook their heads. Not me. I remembered how just four years ago barely anyone had even heard of San Diego State basketball, and why the students deserved to celebrate a little. A simple idea… but a big lesson.

The last time I set foot on that campus, I walked away with the determination that my book was about the college experience. This time, I walked away with the understanding that it’s about so much more. While the proceeds still and always will go to help kids get to college, I hope the story will help readers get somewhere else: a place where they embrace their own stories, appreciate and learn from their past, and use it all as a catalyst for a great future. 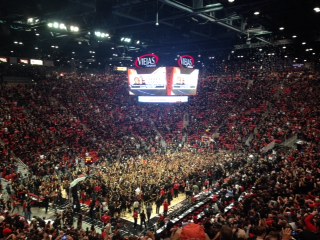 What readers are saying about And Then it Rained: Lessons for Life:

“I’m long past my college days, but I could relate to Megan’s poignant story, from her search to find the right mentor, to dealing with her dad’s alcoholism and her parents’ divorce, ending in her courageous decision to strike out on her own and pursue her dreams.

“All of the life lessons here are revealed in a simple and straightforward manner, without heavy-handed moralizing. We get these challenges and revelations through Megan’s eyes and it’s an honest account of her journey and growth. I look forward to reading more from the author.” – Tmully58 (Amazon)

“This is a very good, quick read, and Morrison provides just the right amount of inspiration without sounding preachy. A wonderful book for young adults, teens, pre-teens, and anyone struggling to come to grips with the sometimes harsh, sometimes beautiful, and very often mysterious curves life throws at us.” – Matthew (Amazon)

“Megan wears her heart on her sleeve and describes her journey from a small town in Wisconsin to the college of her dreams. The path there isn’t easy, and the challenges don’t stop once she’s enrolled, but all students can be comforted by this story in knowing they aren’t alone in facing challenges to and through college. Megan’s story is an inspiration to us all. Give it a read!” – Jennie (Amazon)

“Through meaningful quotes added to her own words, Megan poignantly describes the heartache of a parent disappointing his daughter, the adoration of a role model, and the difficult, but triumphant decision of leaving home to achieve her dreams. Students will relate to the difficult decisions that Megan made in high school. Do you follow the crowd? How hard are you willing to work to attain your dreams? Can you let go of someone you admired, but who let you down? Will the homesickness that comes with starting college ever end? Megan shows students that you can go your own way: make the best choices for yourself and live life to the fullest.” – Jennifer (Amazon)

This entry was posted on Tuesday, March 18th, 2014 at 7:00 am and is filed under Blog. You can follow any responses to this entry through the RSS 2.0 feed. You can leave a response, or trackback from your own site.